Posted in Landscaping & Gardening | No Comments

Soil tests are like blood tests done at an annual physical examination. Although not designed to address specific concerns, they give a general summary of a system’s—body and soil—well-being. Sampling is perhaps the most critical part of soil testing because the test based recommendations are only as good as the samples taken.

Soils are highly variable in managed landscapes. Areas that have unique characteristics need to be addressed separately; with separate soil tests. To have a good representation of the soil, cores need to be taken from areas of uniform slope, soil texture, soil color, or similar plant growth; really any characteristic that gives a distinct picture of the area. The number of cores is dependent on the size of the area.

If it is a large property cores can be collected about every 50 paces or so, in random pattern. The larger the property, the more samples there will be. For smaller properties the sampling is going to be more concentrated, with no less than ten cores taken. The more cores there are, the more precise the test results will be. All the cores from the designated area are going to be combined into a single composite sample, of which only one cup will be sent to the laboratory.

Clean tools must be used. Ideally, the most efficient tool—the best tool—is a soil probe. Soil probes are generally stainless steel or chrome-plated. If a soil probe is not available, then a clean shovel, spade, trowel, or even a soil auger—something to gather up soil—can be used, but it must not have rust on it. Rust has a major affect on soil test results. Additionally, any tool used with ice melts, manure, etc., will have an affect on the soil test results. The use of a clean soil probe is best. 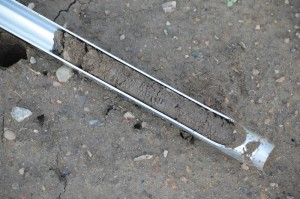 The depth from which the soil is to be taken depends on the “crop.” For lawns and turf a three to four inch depth is adequate. That is where the plant roots are; unless there is a problem with thatch (that issue would have to be addressed separately). In general, three to four inches for turf areas, and five to seven, maybe eight inches in a garden. Tree and shrub roots are somewhat deeper, but again the goal is to look at the general well-being of the soil system so excavating to the depth of the roots is usually unnecessary.

There are areas that should not be included in the composite sample. These include low lying areas where water gathers during or after rainfall, as nutrient runoff in these areas have a significant affect on the soil system. Places right along fences, buildings, or any other type of solid structure should be monitored separately because very frequently these areas are under or over-treated do to their proximity to the structure, thus making them uniquely different. Areas where an old building or driveway once existed and has since been removed, especially if there was concrete or some other material that would affect the soil test should not be included in the composite sample. Areas where there is a supply of ash, e.g., brush and leaf burning, cookouts, and fire pits should be separated, as should areas that are exposed to significantly different temperatures. Although not included in the composite sample these areas should all be tested independently.

Soil sampling can be done any time during the growing season, but ideally in the late spring or early summer (reasoning discussed below) and once every two or three years. A caveat is not to do it when there is excess water in the soil, or it freezes. It is not a good time to take soil samples if the core can be placed in the hand and water squeezed from it. The soil should be reasonably friable—crumbles to the touch. If the cores are slightly moist they can be air dried, but never oven dried. Air dry the soil by placing the cores on waxed or untreated paper and let them sit out for up to 24 hours. The composite sample should be relatively free of vegetative matter i.e., roots and leaves, as well as obvious contaminants i.e., plastics, but do not to contaminate the sample by manipulating it with fingers and tools. Getting a good sample at first, makes everything else easier.

The composite sample can be placed in a clean, sealable plastic bag and labeled per the instructions of the chosen laboratory (many labs provide the bag along with their required soil test forms). Once prepared, the package should be shipped so that it arrives at the laboratory within one or two days. The longer the sample is in the bag the greater the potential for ineffectual results, especially if there is moisture in the bag, and the package sits in the back of a delivery truck for a time—where it gets hot, and then all sorts of things happen inside there. In short, it should be hand delivered or sent by one or two day service. It is also beneficial to get the sample to the laboratory early in the week. If it can be shipped out Monday and arrive Tuesday, this is the best. If it gets to the lab Friday afternoon there is a good chance the package will sit waiting over the weekend. Again, the longer it waits, the less reliable the results.

The reasoning for doing soil testing in late spring and early summer is threefold. First, the soils are biologically active and fertility is at its best. Second, it provides ample time to prepare a management plan that begins in the autumn (the best time to make changes with soil amendments). Third, laboratories tend to have less volume during this period, and less volume often means the results of tests are returned quicker than during the busy seasons. No matter when it is done, remember, soil test recommendations are only as good as the samples taken.